What is a hysterectomy?

How is it performed?

Historically, hysterectomies have been performed either by making an incision in the abdomen or, if the uterus is not too large, an incision in the top of the vagina-a vaginal hysterectomy. When an incision is made in the abdomen, not only the skin but many other layers need to be cut and to heal. This produces a significant amount of post-operative pain and recovery time. It is actually the healing of the skin and other layers beneath it that accounts for most of the pain women experience after a hysterectomy, not the actual removal of the uterus. A vaginal hysterectomy reduces the pain of recovery, but can only be performed on women who have a relatively small uterus and have no other diseases or prior surgery that may have caused adhesions.

What is a laparoscopic hysterectomy?

Today, there are several surgical approaches that are far less invasive than a total abdominal hysterectomy, which is still widely performed. Using a laparoscope â€” a slender, fiber-optic tube equipped with a miniature camera, lights and surgical instruments â€” surgeons have the ability to see inside the abdomen and technical access to the uterus, ovaries and fallopian tubes without having to make a large incision. The surgery is completed utilizing only four tiny abdominal incisions less than one centimeter in length. Even a large uterus can be removed laparoscopically using this technique.

What are the advantages of Laparoscopic Hysterectomy?

• A traditional open hysterectomy requires an abdominal incision of ten to fifteen centimeters compared to the small incisions made for laparoscopic hysterectomy.

• Post surgically, patients have a much quicker recovery They report less pain, minimal post-surgical use of painkillers and a faster recovery time than women undergoing abdominal hysterectomies, who usually require a three to four day hospitalisation and a lengthy recovery time of usually six to eight weeks. 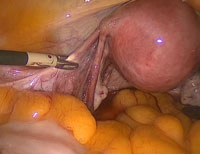 Figure (hysterectomy) Coagulation of round ligament

Round ligament coagulation (detaching the connections of uterus)

Separating the urinary bladder from uterus

Detaching the uterus from vagina

Pelvis after removal of uterus 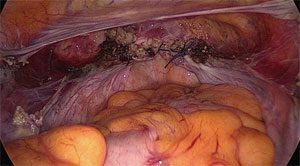 
Who can undergo Laparoscopic Hysterectomy?

Usually all the patients who have been advised for abdominal hysterectomy can undergo laparoscopic hysterectomy.

Can a person who has undergone operations in the past go in for laparoscopic hysterectomy?

Yes, a patient who has undergone operations in the past can undergo this procedure and if there are adhesions because of previous operations, they can be removed along with the laparoscopic hysterectomy, in the same sitting.

Can associated ovarian, tubal or uterine disease all these be treated in the same operation laparoscopically?

Yes, it is very much possible to treat/remove the ovaries and tubes while carrying out laparoscopic hysterectomy.

Do I need any special investigations for laparoscopic hysterectomy?

The usual routine tests are required as for any other operative procedure and no special investigation is required for laparoscopic hysterectomy.

Can a person having disease like diabetes or high blood pressure undergo this procedure?

Yes, after controlling the diabetes and high blood pressure, a person can undergo this procedure, and in fact the advantages of lesser chances of infection and early recovery are much beneficial for them.

Where should one get the laparoscopic hysterectomy done?

It is an advanced laparoscopic surgery procedure, and itâ€™s always advisable to get it done in an advanced care institution, where the whole set of equipment is present along with its complete backup facilities.

Do I have to get admitted a day before the surgery?

If you are fully investigated and have undergone a pre-anaesthetic checkup, you can get admitted the morning of the operation.

Under what type of anaesthesia is it carried out?

This procedure is carried out under general anaesthesia.

After how many days can I go back home after the surgery?

On an average the total hospital stay is for 24-48 hours, after which you can go back home.

What are the usual precautions I have to take after I reach home?

On an average, two hours after lunch and eight hours rest after dinner is what is usually recommended. You can climb stairs for two to three floors slowly, walk half to one km slowly and carry out sedentary work at home without much difficulty. One can have daily bath.

When do I see the doctor again after the operation?

Routinely, the patient is called after 4 weeks for an internal checkup.

When can I resume my normal activity / go back to work?

After one week, you can resume normal activity like walking, cooking, driving, sitting in front of the computers for 4-6 hrs etc. Intercourse, strenuous exercise, lifting of heavy weights, swimming etc. has to be avoided for a period of six weeks.

Questions you may ask

Q. Will hysterectomy affect my sex life?
No. Hysterectomy does not make a women sexually mutilated and undesirable it does not shorten her Vagina so that sexual intercourse is impossible or potentially dangerous. In most cases when the womb is removed the vagina is cut at its uppermost end, and the cervix no longer projects into it so if anything the vagina is a little longer after the operation. In rare cases the cervix is left when the surgeon removes the section of the womb above it. In such a case there is no alternation at all to the vagina.

Q. Must I take some medication for the rest of my life?
No, unless both ovaries are removed. Then you will need to take only the oestrogen tablets, to replace natural hormones â€“ and these only for a limited time.

Q. Will suffer a personality change?

This is really up to you. If you convince yourself you will be changed nothing will prevent you from becoming a chronic neurotic. But the operation will not cause it.

Q. How soon will I be able to return to normal duties?
As with any other major surgery It is advisable to take things quietly for 2 weeks and gradually Increase activity rather than rush into it. Your doctor will advice about the length of time needed for convalescence â€“ usually 3-4 weeks.

Q. Will be semi â€“invalid for the rest of my life?
No you will no doubt feel healthier than before the operation as the complaint for which it has been advised will be cured.

Q. Would an outsider know I had a hysterectomy?
There will be no visible signs. Many of the women you pass daily in the street, or work with have had the same kind of operation. If you or your husband have any further questions or fears you would like to allay, talk it over with your doctor. He â€“ not an uninformed relative or friend â€“ is qualified to advice.

Q. will still be able to reach an orgasm or â€œclimaxâ€ during intercourse? Yes removal of the womb has no effect on this.

Q. Will my husband be able to feel to any physical change in my body, when we have sexual intercourse?
No unless he was told a man would not know a woman had undergone this type of surgery.

Q. How soon after the operation should my husband and I resume normal sexual relations?
Once the top of the vagina has healed strongly, which takes about six weeks sexual intercourse can be resumed safely and with normal satisfaction.

Q. Will I become fat?
Only if you sit about and eat too much instead of carrying on normal activities. Woman who grows fat after any surgery usually do so because during convalescence a pattern of over eating and under exercising is set and this begins a habit difficult to break.

Q. Will I become hairy or develop male characteristics?
No the womb does not produce any hormones â€“ the ovaries do this â€“ so removal of the womb will make no difference to hormone balance.

Q. Will I go through an immediate â€œchange of lifeâ€?
Only if both ovaries are completely removed in which case the oestrogen tablets you will be given will minimize or completely relieve symptoms.